Sometimes you get bad advice even from the Social Security office

A friend of mine contacted me a few days ago. A long-time friend of hers was looking into filing for disability benefits. Actually, he had been considering filing for about three years, which was part of the problem (if your condition is severe enough that it makes it difficult for you to engage in and do work activity, "thinking" about applying for disability may simply amount to a very huge waste of time since, during that time of consideration you might have navigated through several layers of the system, such as the initial claim and reconsideration appeal).

He had finally gotten up the nerve to contact a local security field office and asked the person on the other end of the line "Will I qualify for disability?". This, of course, was mistake number two. The individuals who answer the phones at social security offices are SRs, or service representatives. They do not take claims but are clerical support personnel. As such, they are not qualified to answer questions like this.

Despite this fact, the service representative responded to the man's question by asking him "Can you work at all?". He told her he had been involved in programming for most of his working career. The absolute truth is that he was a cobol programmer. I don't think they even teach this language anymore and most leftover jobs for cobol have to do with very old systems in institutional settings that have not managed to creak into the 21st century...so, you can certainly see that there's a lot of forward job opportunity associated with being a cobol programmer.

After informing her of his computer background, he told her that, though his condition impaired him in such a way that he could not focus and concentrate enough to do his old job, he could still "probably flip burgers". To which the service rep replied "Then you're not disabled".

This was the the point at which my own friend, who is a friend of the cobol programmer, called me. Upon hearing the story, I told her that service reps are not qualified to answer such questions. However, there really isn't anyone at the social security office who is. That's because even the CRs, or claims representatives, who take disability and retirement claims, only take the claims. They don't actually work on them. That duty is left to disability examiners and the medical and mental consultants who provide case support to them (an M.D. physician and a Ph.D. psychologist, both of whom work in the same unit as the examiner).

Disability examiners work at a state agency that is entirely separate from the social security office. After a claim for disability is taken at a social security office, it is sent to DDS (disability determination services, or whatever serves as the equivalent agency in a particular state) agency for decision-processing, where it may stay for weeks or months while evidence is being gathered and evaluated.

More to the point, though, this particular social security employee arguably "did a bad thing". Because in their complete ignorance of how the Social Security Disability and SSI process works, they left this individual with the clear impression that, if he could work at any job and at any level of earnings, he could not be found disabled by SSA. Which is completely untrue. The system administered by SSA takes into account whether or not a person can return to their past work, but also whether or not they can do some type of other work. And that "other work" part is highly mediated by a number of considerations such as a person's age, transferable skills, and current and anticipated functional limitations which may be mental or physical in nature.

The process for making a disability determination can seem fairly complex. And in some ways it is, and in others it isn't. But one thing certainly stands out as true. There are no individuals manning the phone lines at the social security office who are qualified to answer the question "Am I disabled?". So, one point of advice to individuals who are considering filing an application for disability would be...don't ask that question, because the uninformed answer that you get back will only serve to disappoint and perhaps lead you astray.

Archives for this blog.

Neither this blog, nor the facebook page, nor my website are affiliated with the Social Security Administration. 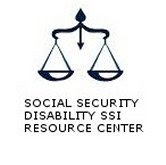